Today, Friday 1st August officially Mother Jones Day in Cork and is also the final day of the Spirit of Mother Jones Festival. After an inspiring day of film, music and debate Day 3 ended last night with a full house at the Firkin Crane for Si Kahn and Anne Feeney in concert which received rapturous applause and plenty of audience participation. The night ended with a fabulous music session at the Maldron Hotel.

Todays programme includes film on Cork socialist Tadhg Barry, discussion in Mother Jones’ links with James Connolly and Jim Larkin, a discussion with singer songwriter Si Kahn on his union and environmental activism , the Mother Jones Garden Party, plaque event. The highlight of the evening will be the premiere of Mother Jones and her Children, a film by Cork’s Framework Film. The number day and the festival wind down at the Maldron Hotel from 9.30pm with a bluegrass music session with Two Time Polka.

Sunny weather greeted those arriving for Day 2 of the Spirit of Mother Jones Festival in Cork’s Shandon area yesterday morning.  After breakfast and some tea or coffee on the plaza everyone proceeded to the Firkin Crane Centre for the opening session.   A fascinating talk was given by local Cork historian Luke Dineen on the Cork Harbour Soviet of 1921.

This was followed on by a thought-provoking lecture by David Joyce, Development Officer of the Irish Congress of Trade Unions on the situation in Qatar where thousands of migrant workers are engaged in building stadiums for the 2022 football World Cup in appalling conditions, with over 1,000 deaths of construction workers.  ICTU and international labour organisations are currently campaigning for a rerun of the FIFA vote which awarded the 2022 competition to Qatar.  For more information visit rerunthevote.org

At lunchtime we had music at the Maldron Hotel with an excellent performance from James P. McCarthy and friends. 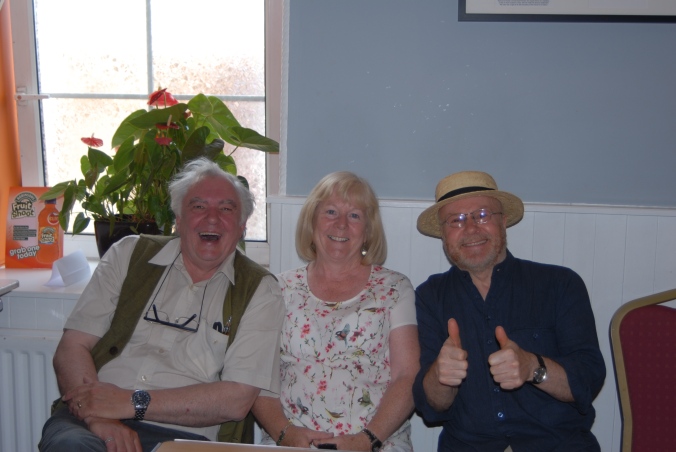 The afternoon session began, back at the Firkin Crane, with a powerful lecture by Claire McGettrick on the story of the women who were detained in and worked in the Magdalene institutions.  This was followed by a frank discussion on the topic and the ongoing fight for justice of the survivors and their families.

The highlight of the event was the thoughtful lecture delivered by solicitor Gareth Peirce on the way in which laws designed to protect citizens and uphold their civil and human rights have often been ignored or nullified by governments and state agencies for political considerations.   The large audience was attentive and engaged with her comments and Ms. Peirce answered a number of questions at the end.   As the session closed, Ger O’Mahony of the Spirit of Mother Jones Committee announced that the 2014 Spirit of Mother Jones Award had been awarded to Gareth Peirce and he presented her with a sculpture depicting the Children of Lír.   Members of the Cork Mother Jones Committee joined Gareth Peirce on stage for photos while the audience gave her a standing ovation.

To end the evening the Mother Jones Gala Concert was held in the Firkin Crane with a host of musicians and performers including Richard T. Cooke and friends, the Cork Rokk Choir, Cork Shakespearean Company, Aoife Delaney, Kieran McCarthy and William Hammond.   This was followed by the Mother Jones Céilí Band at the Maldron Hotel, led by William Hammond who encouraged audience members onto the dance floor for a variety of dance styles including Irish dancing, old time waltz and even line dancing.

Above are a sample of the many hundreds of photos taken so far at the festival.  We will be adding more in the coming days, especially when the festival is over and we will have time to sort out the photos.

Gareth Peirce is well known and respected for her legal defence work in cases involving miscarriages of justice in the British legal system. She is best known in Ireland for her indefatigable work in the 70s and 80s in securing the release of Judith Ward, the Guildford Four and the Birmingham Six. The dramatic television pictures of whose releases have become defining images of a broken and perverted justice system. She also campaigned against the detention of striking miners during the 1984 Miners Strike.

In more recent times she has defended the British Muslim community who have been at the receiving end of State injustice.

Gareth is known to many British Muslims simply as “al-Umm” or “Mother”.

Ms Peirce initially worked as a journalist before taking a law degree and joining the legal firm of Benedict Birnberg. She is today the senior partner of Birnberg Peirce & Partners in London.

The legendary commitment to her clients is very evident, her meticulous pursuit of the inconvenient truth and her razor sharp legal analysis has ensured freedom and justice for many people who placed their faith in Gareth Peirce. She has displayed a deep respect for the experiences of ordinary people or people who may be vulnerable and will relentlessly expose a situation where she believes a blind eye has been turned to suspect methods used to obtain unsafe convictions.

The publication “Dispatches from the Dark Side – On Torture and the Death of Justice” is the definitive work on the abuse of power by some State institutions. Utterly fearless and relentless in pursuit of truth and justice and in the defence of civil rights, Gareth continues to detail the experiences of a new suspect community of young British Muslims and point to the similarities of their experiences to those of the Irish community in Britain a few decades ago.

In a series of cogent and perceptive essays from 2008 to 2010 for the London Review of Books she examined the threats to the justice system, which arise from within. Ms Peirce is adamant that where the law is used for political ends, it will lead also to the subversion of justice itself. Arguing that to protect ourselves for the future, we need to know and examine what has occurred in the past resonates with many people who recognise how true that is in the Irish context.

Her good friend Gerry Conlon passed away recently and at his funeral in Belfast on Saturday 28th June last, Gareth Peirce in her funeral oration described him as a “victorious human being who had stated the truth and finally many people woke up to the injustice”. Gareth Peirce’s words about Gerry could be equally applied to her own huge impact on people and why everyone should question legal injustice.

The Cork Mother Jones Committee is honoured that Gareth Peirce will speak at the Spirit of Mother Jones Summer School on Wednesday evening 30th July at 7.15pm at the Firkin Crane Centre.

Today (Wednesday, 30th) is Day 2 of the Spirit of Mother Jones Festival in Cork city.   Proceedings begin at 11.00am at the Firkin Crane theatre, Shandon when lecturer Luke Dineen will tell the story of the Cork Harbour Soviet which occurred during the Irish independence struggle in 1921 when militant striking workers flew the red flag over the city’s harbour authority offices and took control of the port for a period.

At 12.0 Noon, David Joyce, development officer of the Irish Congress of Trade Unions will give a lecture on “Qatar… a World Cup graveyard?” in which he will outline the appalling level of well over 1,000 workers to-date, the use of virtual slave labour and other ill-treatment of workers in the building of stadiums for the 2022 World Cup which is due to be held in Qatar.

That will be followed by lunchtime music at the Maldron Hotel by Cork’s own James P. McCarthy.

In the afternoon at 3.00pm back at the Firkin Crane, Claire McGettrick will speak about the Magdalene laundries and the ongoing campaign for justice for women who lived and worked there under conditions of detention and slave labour.

The major event of the evening, also at the Firkin Crane,  will be solicitor Gareth Peirce‘s speech under the title “Defending the Underdog” (see adjacent article for more details).

At 10.30pm, to wrap up a very full day, the Mother Jones Céilí Band will perform at the Maldron Hotel.

Some of the guests at this year’s Spirit of Mother Jones Festival, along with committee members, being received at Cork City Hall today, by the Lord Mayor Mary Shields. 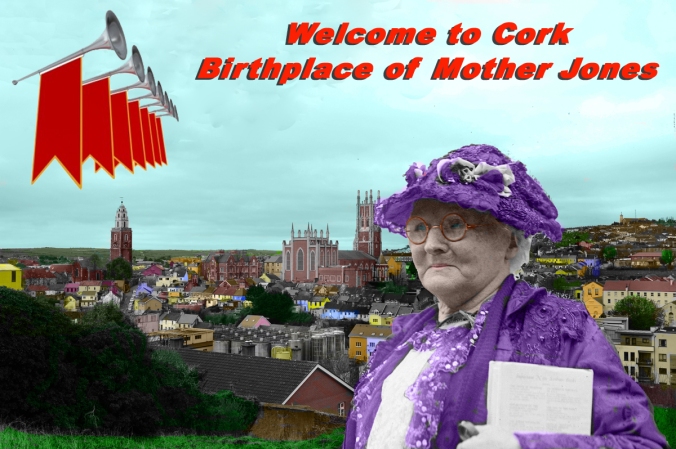 The third annual Spirit of Mother Jones opens tonight, heralding the start of a four-day festival of film, debate, music and more in the historic Shandon area on Cork City’s Northside. The festival is the culmination of months of preparation and effort and puts in place an event which has now become established as one of Cork’s most unique festivals, recalling the life and legacy of Mary Harris / Mother Jones, Cork’s rebel daugthter, America’s venerable campaigner.

Today’s events, under the heading “The Gathering”, are as follows:-

6.00pm – “Mother Jones, America’s Most Dangerous Woman” – a film by Rosemary Feurer (at the Firkin Crane).

7.30pm – The Cork Mother Jones 2014 Lecture with Professor James Greene of the University of Massachusetts, Boston and author of Death in the Haymarket and the West Virginia Mine Wars.

There is an extra feature tonight for all budding songwriters! 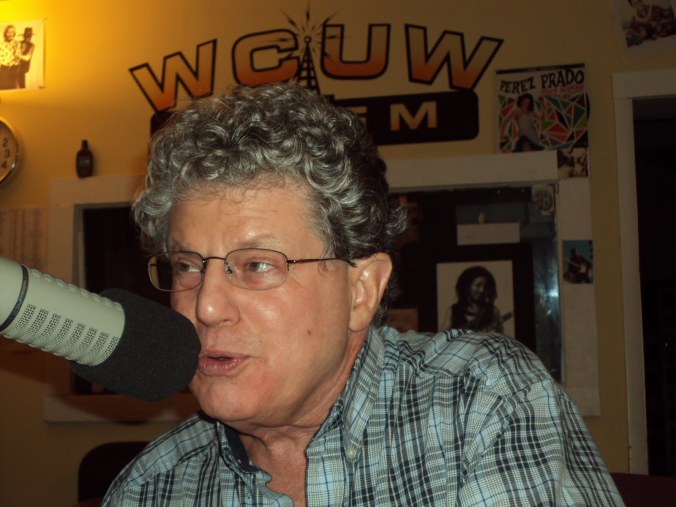 Monday 28th July: Spirit of Mother Jones festival
Si Kahn song writing workshop at the Maldron Hotel at 8pm. Open to all songwriters, singers and people interested in how to pen songs, all are very welcome to come along and discuss their song ideas with Si. 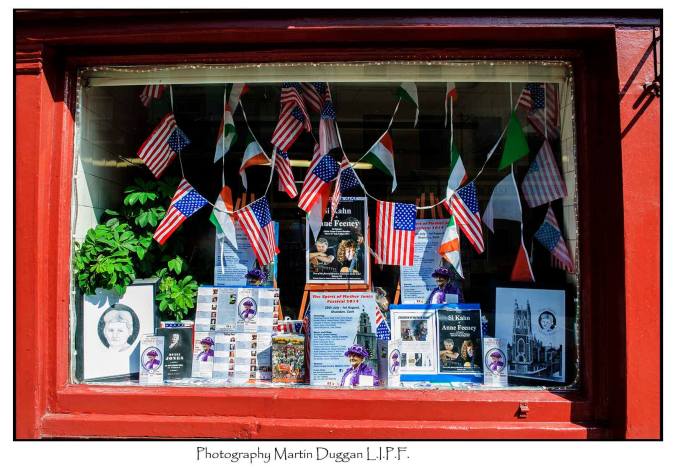 A few days ago we reported that volunteers were busy preparing the Shandon area of Cork for the Spirit of Mother Jones festival which starts next Tuesday, 29th July.   Today we have some photos to show the results of that work.    Our sincere thanks once again to Shandon Area Resident’s association, local business premises, Cork City Council and local volunteers. 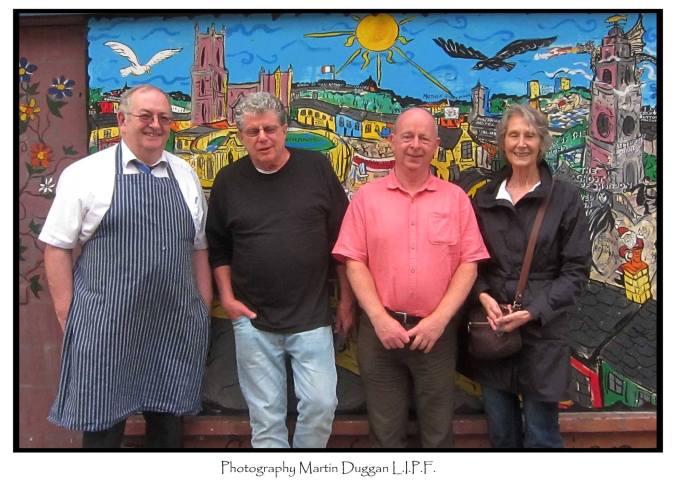 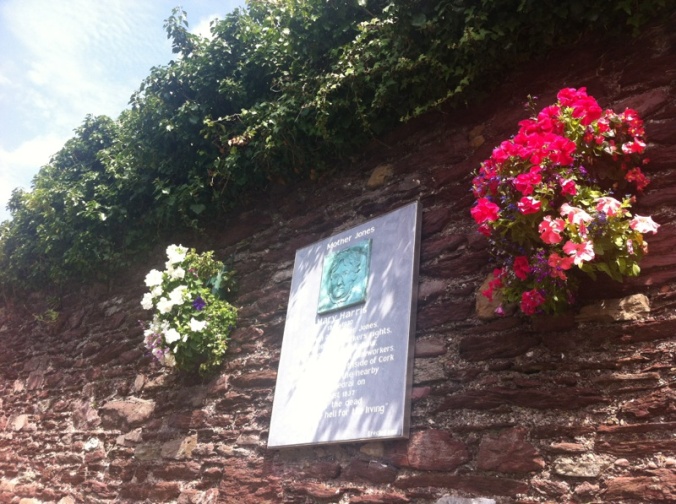 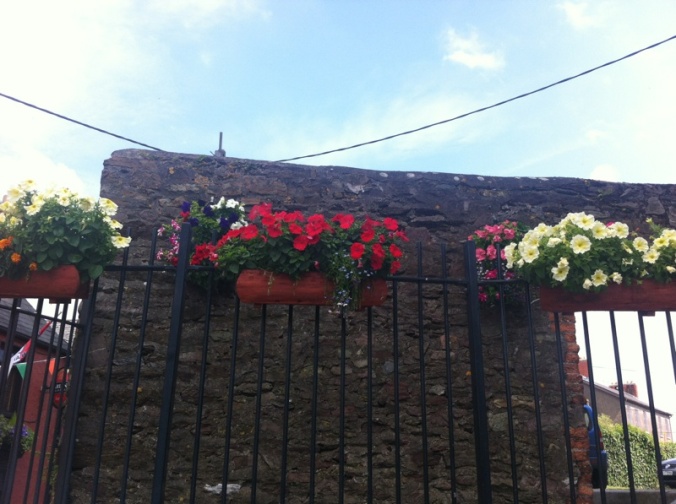