Mary Manning, one of the Dunnes Stores Strikers will speak at the Spirit of Mother Jones Summer School on Friday evening 3rd August at the Firkin Theatre in Shandon at 7.30. 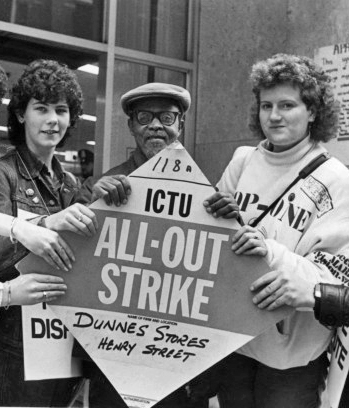 She describes what happened…

“My palms started sweating as I opened up my cash register. Everything after this happened very quickly. I spotted a middle-aged woman in the distance with two large yellow grapefruits in her basket. My heartbeat increased at the sight of them. I avoided eye-contact and popped my head down straight away. ‘Please don’t come to me, please go to any other till’ I thought to myself but the woman plonked her basket at my till, completely oblivious to the internal crisis unfolding within me.”

That morning, Ms. Manning refused to register the sale of those South African products. She was immediately suspended and another nine of her colleagues joined her on the picket line.

In her recent book with Sinéad O’Brien “Striking Back – the untold story of an Anti-Apartheid Striker”, published by Collins Press, Mary describes the long months during which she and her union colleagues spent on the picket lines, even as the strike began to generate worldwide publicity.

She describes the ups and downs of the protest and gives a vivid account of the dark days of the protest when the young Dublin women and their colleague Tommy Davis felt very alone. Mary tells of her growing personal commitment to the strike and her increasing political awareness and independence unfolds as the daily grind of the strike continued for almost three years.

However the spirits, morale and determination of the strikers remained high in spite of the failure of some fellow workers to support them, personal sacrifices in the midst of a recession and being let down by some of those who should have provided support. Yet as the national support for the strike and widespread opposition to apartheid grew, it led to people such as Seamus Heaney, Christy Moore, Sean McBride Donal Lunny, the incredible Nimrod Sejake and thousands of people joining the strikers on the picket line in Henry Street and other protests in Dublin and elsewhere around the country. The resolve of the strikers began to make international headlines.

In July 1985, the strikers attempted to visit South Africa to meet Bishop Desmond Tutu, winner of the Nobel Peace Prize in 1984, at his invitation, but they were arrested at Jan Smuts Airport, refused entry and banned from the country. On their eventual return to Dublin, the strikers were introduced to the world’s media as “the ten deadliest shop workers in the world” by their union official, the late Brendan Archbold. It proved to be a huge international PR disaster for the apartheid system and the South African government.

As a result of the support for the strike, by April 1987, the Irish government had banned the importation of South African products and later Mary and some of her colleagues finally returned to work.  However as she and Karen Gearon were being treated within Dunnes Stores as the ringleaders of the strike she felt they were being singled out and all aspects of their work questioned and so finally Mary left the company. On the 5th November 1988, she emigrated to Australia, where she spent five years.

Less than six months after his release from prison after 27 years, on 2nd July 1990, Nelson Mandela arrived in Ireland and met the Dunnes Stores Strikers. He praised how the “ young shop workers on Henry Street in Dublin, who in 1984, refused to handle the fruits of apartheid, provided me with great hope during my years of imprisonment and inspiration to millions of South Africans that ordinary people, far away from the crucible of apartheid , cared for our freedom.”  Mary was unable to afford the flight to come back from Australia to meet Nelson Mandela.

On 18th May 2015 a plaque was unveiled on Henry Street, Dublin which commemorates the actions of Mary Manning and her colleagues….. brave and inspiring actions which had a worldwide impact.

Mary Manning accompanied by Sinéad O’Brien will tell the story of the historic Dunnes Stores Strike at the Firkin Theatre on Friday evening 3rd August. All are welcome.