Saturday morning 3rd August at 10.30am 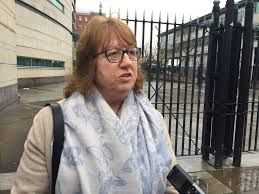 On Saturday morning 3rd August , Briege Voyle will speak about what has become known as The Ballymurphy Massacre. Briege is the daughter of Joan Connolly. Joan, a mother of eight was shot dead by the British Army’s Parachute Regiment on Monday August 9th 1971, the day Internment without Trial was introduced in Northern Ireland.

Eleven people including Fr. Hugh Mullan, the parish priest in Ballymurphy in West Belfast were killed as a result of the actions by the British Army over the three days.  Fifty children endured the loss of a parent. The killings left the entire community traumatised yet no action was taken against those responsible and no one has been held responsible to date. This Parachute Regiment was later transferred to Derry. It went on to be responsible for Bloody Sunday on 31st January 1971.

Briege who has been prominent in the campaign for decades along with other relatives seeking the truth will tell her story of the human consequences for herself, her family and friends as a result of the actions of the British Army in her community during those three days in 1971. Other children of those who died will also attend and tell their personal stories.

The morning will also feature the showing of The Ballymurphy Precedent directed by Callum Macrae made in association with Channel 4. This was first released in August 2018 and featured in a cinema launch including a discussion with John Snow in the chair. The documentary was later broadcast as Massacre at Ballymurphy by Channel 4 on September 8th last.

The documentary provides a reconstruction of the shootings, with the survivors and families giving an account what took place in this small community in Belfast over three harrowing days. Their grief is palpable, and the huge sense of burning injustice at the loss of loved ones permeates the production.

After decades of campaigning, an inquest into the deaths began its oral hearings in Belfast on 12th November 2018 and these hearings continue under Presiding Coroner, Mrs Justice (Siobhan) Keegan.

Briege Voyle will speak at the Firkin Crane Theatre, on Saturday morning 3rd August at 10.30 am.

All are welcome to come along.