Helen O’Donovan sings “Black Flowers” by Lynn Miles at the annual toast to Mother Jones at the Mother Jones Plaque, Shandon, Cork on the final day of the sixth Spirit of Mother Jones Festival & Summer School 2017.

Cork singer Rory McCarthy sings “Valley of Jarama”, a song from honouring the International Brigades . A short ceremony was held across the road from 37, Pope’s Quay, Cork where Michael O’Riordan was born was born in 1917. The young O’Riordan left from here in 1938 and travelled to Spain to fight on the Republican side in the Spanish Civil War, in opposition to fascism. Seriously injured, O’Riordan returned to Ireland as the war ended with the defeat of the forces of democracy. Later he was a leading member of the Communist Party of Ireland and served as its General Secretary for many years. O’Riordan died in 2006. His son Manus and daughter Brenda were present for the ceremony which was part of the 2017 Spirit of Mother Jones Festival.

The new song was in the course of completion when Karan was asked to sing it at the Maldron Hotel during the 2017 festival.  Well done Karan.

Today is Day 4 of the Spirit of Mother Jones Festival & Summer School 2017 and promises a full day of events.  The main theme of most of today’s activity is around the Spanish Civil War (1936-1937) and we will also be honouring Michael O’Riordan who fought on the Republican side in the war and whose centenary is being marked this year.  Michael was born at number 37 Pope’s Quay, under the shadow of Shandon Steeple.

The Cork Mother Jones Committee is proud to announce that Ken Fleming of the International Transport Workers’ Federation (ITF) and SIPTU is the recipient of the 2017 Spirit of Mother Jones Award.

Ken has been an inspector in the ITF since 2006 and the ITF Co-coordinator for Britain and Ireland since 2012 and has sought over the past decade to prevent the exploitation of seafarers on some vessels operating under Flags of Convenience visiting various ports including Cork.  Ken has recouped millions of euro in unpaid wages for foreign seafarers in Irish ports, has had several vessels detained and has ensured their crews are repatriated home.

He has tenaciously and passionately fought for the rights of seafarers and fishers on the seas and has become one of the best known and respected trade union officials in the world.

More recently, Mr. Fleming has been engaged in an international campaign to ensure decent working conditions, employment rights, proper wages and legal protection to the migrant fishers who work in the Irish and the UK fishing fleets. He called for a major overhaul of the Irish fishing industry, claiming in a submission to an Oireachtas Committee that the current regulatory permit scheme for migrant fishers has not worked and instead has led to legalised slavery for many hundreds of migrant fishers.

According to James Nolan, spokesperson for the Cork Mother Jones Committee,which presents this annual award:

“Ken Fleming has been willing to challenge the official silence on the blatant exploitation of many seafarers and migrant fishers in ships operating under Flags of Convenience in Ireland and the UK. He is a fearless, passionate and a determined defender of the workers who have been denied their rights and continually he exposes and challenges a system which treats many of them as virtual slaves”

“Ken has bravely exposed the exploitative working practices in sections of the marine and fishing industries and he has sought to organise the migrant fishers. He has repeatedly called on the relevant State agencies to enforce a recent permit system which would allow these fishers the right to protect themselves against exploitation. We should not allow our fish to be caught or our goods to be transported or our passengers to be carried on the back of slave labour!  Ken Fleming is a worthy recipient of the 2017 Cork Spirit of Mother Jones Award.”

“I am deeply touched by the belief the Mother Jones committee have shown in my work, by selecting me for this very special award. It has been a very long and hard road, but this award has electrified me. The knowledge that a fully independent group not only recognise the work we have done, but fully support the determination to stamp out the scandalous abuse of workers completely, is inspiring. This award represents the most satisfying moment of my career.”

“It places the work of the ITF amongst a very special group of people that have devoted a great part of their working lives to see justice done. And it’s been a team effort – my fellow UK Inspectors, Liam Wilson and Darren Proctor, have faced the aggression with me head on in most ports in Ireland.”

“We can now look to the Spirit of Mother Jones for inspiration as I have a sense that she is now aware of our struggle, and my hunch is she will find a way to lend a hand.”

Ken Fleming is a native of Dublin. He started work as a bus driver and worked his way through the SIPTU organisation until he was seconded from SIPTU to succeed the late Tony Ayton in the International Transport Workers’ Federation in 2006.

Ken attended the 2013 Spirit of Mother Jones Festival where in an unforgettable speech he spoke movingly and with empathy of the exploitation endured by many seafarers and fishers.

The Cork Mother Jones Committee is privileged that Ken has accepted this award which is presented to people who act and work in the Spirit of Mother Jones. We are satisfied that our selection of Ken Fleming for the 2017 award is very true to this spirit.

The 2017 Award was presented to Mr. Fleming by the Cork Mother Jones Committee on today (Thursday) afternoon August 3rd at the Firkin Theatre, in the Shandon Historic Quarter of Cork.

The Cork Spirit of Mother Jones Awards to date have been,

There is an environmental theme to today’s events which begin at 11.00am with what promises to be an interesting and topical talk by Councillor Marcia D’Alton on “The Environmental Battle for Cork Harbour”.

We will have Music at the Maldron Hotel at 1.00pm and at 2.30pm at the Firkin Crane we will be showing the thought-provoking documentary “A Plastic Ocean” by Australian journalist and film-maker Craig Leeson.

at 7.30pm we will have a lecture at the Maldron entitled “Climate Change – Our Response” by Fr. Sean McDonagh who has written extensively on environmental issues and is currently President of An Taisce.

Above: The Lord Mayor of Cork, Councillor Tony Fitzgerald, Tony Fitzgerald being presented with an ornamental urn containing earth from the grave of Mother Jones at Mount Olive by Jim Goltz of the United Mine Workers of America – on the opening night of the 6th Spirit of Mother Jones Festival at the Maldron Hotel, Cork, last night. Photo via William Hammond. 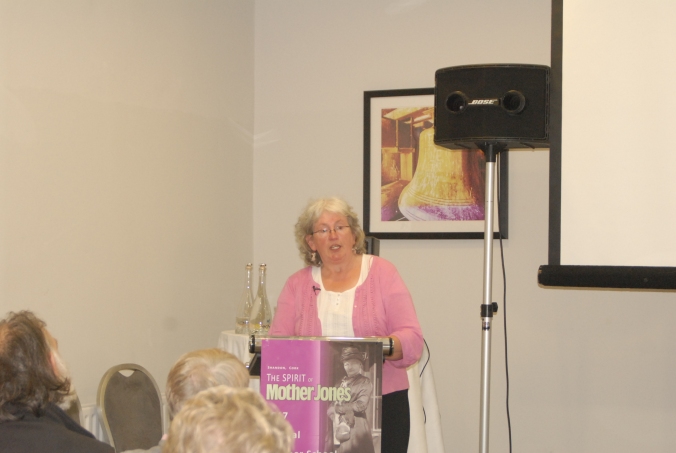 Julianna Minihan who gave a most interesting talk about the life and work of U.S. social reformer and campaigner Florence Kelley,

James Goltz with framed proclamation from the International President of the United Mineworkers Union of America. This and two other proclamations presented by James to the Cork Mother Jones Committee can be seen in full on the Spirit of Mother Jones festival website.

Ed Byrne, outgoing President of the ASTI who spoke on “Challenging Injustice, Inequality and the Unethical” 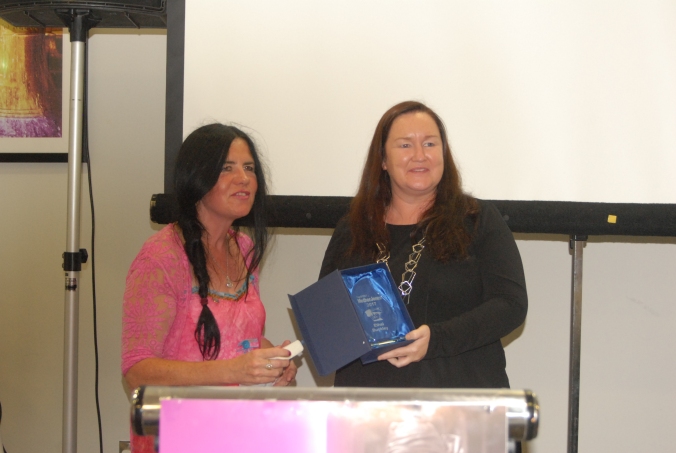 Ed Byrne of the ASTI with presentation from the Cork Mother Jones Committee presented by Ann Piggott of the committee.

1st August 2017, is Mother Jones Day in Cork and it is also the opening day of the 6th annual Spirit of Mother Jones Festival & Summer School in the Shandon area of the city.

Today’s events start with the official launch of this year’s festival by the Lord Mayor of Cork, Councillor Tony Fitzgerald at the Maldron Hotel.

After the opening ceremony takes place, at 2.30pm there will be a showing of “Mother Jones: America’s Most Dangerous Woman” by Rosemary Feurer.

This will be followed at 3.00pm with a lecture by Julianna Minihan who will talk about the life and career of Florence Kelley entitled: “Slums, Factories and Child Labour: Florence Kelley (1859-1932)”.

At 4.00pm there will be a showing of “Mother Jones and her Children” by  Cork based Frameworks Films which was shot in Cork and the United States in 2014.  This will be followed by a discussion with the film-makers and others involved in the project.

At 7.30pm there will be a series of lectures (The 2017 Mother Jones Lectures) as follows:

The day winds down at 9.30pm with a session of music from the Cork Singers’ Club in the main bar at the Maldron Hotel.