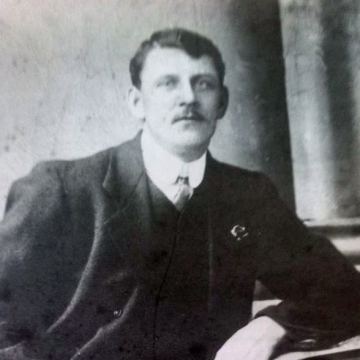 The name of Thomas “Corkie” Walsh would not be one which would have been well known in Cork until recently. Certainly at the time of his death in 1918 he was an important figure in Cork trade union and republican circles and his funeral was attended by thousands of people, yet in later years he was largely forgotten.  That changed as the centenary of his death in 2018 led to a number of events to retell the story of Thomas “Corkie” Walsh and honour his memory.  This memory will again be rekindled at the Spirit of Mother Jones Festival with a lecture by local historian Luke Dineen.

Thomas Walsh was born in Cork around 1882.  The family had strong Irish republican credentials.  His sister Éibhlis (Elizabeth) married Tomás MacCurtain in 1908.  MacCurtain would go on to lead the Irish Volunteers in Cork in the 1916 Rising although the rebellion never got off the ground in Cork due to contradictory orders from the Volunteer leadership in Dublin.   In 1920 Mac Curtain, then Lord Mayor of Cork , was murdered by British crown forces at his home in Blackpool in front of his wife and family.  Walsh’s sisters Susan and Annie were also living in the MacCurtain home and witnessed the murder of Lord Mayor Mac Curtain.

Lord Mayor Tomás MacCurtain pictured with his wife Eibhlís and their children shortly before his murder in 1920. Éilis was a sister of Thomas Walsh

Thomas was apprenticed from an early age to become a stone mason, an ancient trade that has existed since before the building of the pyramids or indeed Ireland’s own ancient Newgrange.  He was Cork branch of the Ancient Guild of Incorporated Brick and Stone layers which today continues having merged into the Building and Allied Trade Union (BATU).

The young Corkman moved to live in Dublin in 1914 and the following year he joined the Irish Citizen Army, which was founded by James Connolly, Big Jim Larkin and Jack White to protect workers who had been attacked by police and military while on picket duty during the 1913 Dublin Lockout.    It was in Dublin that he was given the nickname “Corkie” due to his Cork origins and accent.

Funeral scene from the Cork Examiner

In 1916 the Irish Volunteers and the Irish Citizen Army united to launch a rebellion, the Easter Rising,  for Irish independence.  Walsh was one of a number of participants of the Rising who probably fought under the command of Commandant Sean Connolly at Dublin City Hall.   While he was helping other comrades to erect makeshift barricades in preparation for the inevitable arrival of British military, Walsh was recognised by a group of Dublin friends who began to joke and mock him with his nickname “Corkie” and began to kick his barricade.  In order to disperse them he fired a shot in the air which was the first shot fired in Dublin during the Rising although it had been fired without intent to harm.

Walsh was captured by British troops at the City Hall.  He was one of around 100 participants to be sentenced to death but had his sentence commuted to 10 years penal servitude. It is interesting to note that Walsh was one of the very first of the rebels to be court-martialled – just one day after proclamation signatories and leaders Padraig Pearse, Thomas McDonagh and Tom Clarke. This and the severity of his sentence would suggest he was quite an important figure as far as the British were concerned. After a short period of detention in Dublin he and hundreds of others were transferred to Frongoch internment camp in North Wales.  His brother-in-law Tomás MacCurtain along with other Cork Volunteers, was also detained in Frongoch and it is likely that they met there once again.     The conditions in Frongoch were appalling, one of the two camps was a former distillery and it was cold, damp and had inadequate sanitation. Like a number of other internees, Walsh became ill due to the poor conditions and died within a short time of his release, passing away at St. Vincent’s Hospital, Dublin on 2nd March 1918.  He was 36 years of age.  His remains were returned to his native Cork where he was buried at St. Finbarr’s Cemetery after a funeral attended by many thousands of people.

Unfortunately over the years Thomas Walsh was largely forgotten about and it took the event of his centenary to bring his memory to the fore again.  Thanks to the diligent research by members of the Cork Masons led by their historian Jim Fahy, the memory of Thomas “Corkie” Walsh has been rekindled and a new limestone gravestone, carved by local mason Tom McCarthy, was officially unveiled on 2nd March 2018, the centenary of Walsh’s death. 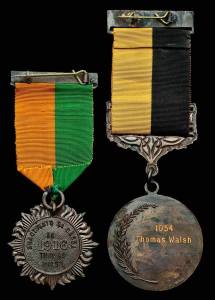 The story of Thomas “Corkie” Walsh will be told by local historian and regular contributor at the Spirit of Mother Jones Festival, Luke Dineen.  The lecture will be delivered on Thursday, 2nd August 2018 at 11.00am at the Cathedral Visitor Centre (at the side of the North Cathedral)