James Goltz lifting the clay from the grave of Mother Jones. (Photo via James Goltz)

As reported from Mount Olive, Illinois by James Goltz

Unique history in the making in Mt. Olive Illinois,at the Union Miners’ Cemetery involving the legendary labour agitator, Mother Harris Jones (Mother Jones), Friends of Mother Jones and Ireland. Mother Jones is buried in the only union owned cemetery in the country, she is the only immigrant who has a so-named festival in her homeland who became a giant in our labour movement, and soon she will be the first to have bit of clay from above her grave transported to her birthplace, the Shandon district in Cork City, Ireland.

Photo shows Secretary of the Mount Olive Perpetual Care Committee Secretary, Mike Krachmar assisting with the placement of the clay in a temporary container. (Photo via James Goltz)

On June 11, Illinois labor activist James Goltz, along with the Perpetual Care Committee of the cemetery held a formal ceremony at her grave site where a bit of clay was removed above her grave. It was given to James Goltz to transport and formally present to the Spirit of Mother Jones Festival organisers in the Shandon Historic Quarter as part of their festival. In addition at the festival, Goltz will also read and present 3 proclamations heralding Mother Jones and the festival from the AFL-CO, the Illinois AFL-CIO and the United Mine Workers of America.

The entrance to the Union Miners Cemetery at Mount Olive, Illinois

Unique link up between the friends of Mother Jones in Mount Olive, Illinois and the Cork Mother Jones Committee in Shandon.

The Cork Mother Jones Committee is pleased to announce that a U.S. trade union member, James Goltz, has been given permission to bring some clay from the grave of Mother Jones at Mount Olive in the Miners Cemetery in Illinois to the forthcoming Spirit of Mother Jones summer school and festival in Shandon where it will be presented to the Committee.

A formal ceremony is to take place on 11th July at the final resting place of Mother Jones (born Mary Harris in Shandon) in Mount Olive at which a small sample of clay will be removed from the grave, will be permanently sealed and will be given to Mr Goltz for transporting to Ireland.

“This is a unique and historic act linking Mother Jones and her birthplace on the north side of Cork to her grave at Mount Olive after some 87 years. (She passed away in 1930) We wish to congratulate the friends of Mother Jones in Illinois for their thoughtfulness with their symbolic act of generosity and solidarity”, declared James Nolan, spokesperson for the Cork Mother Jones Committee.

“The act is a further sign of the growing links and bonds which have been developing over the past six years between the friends of Mother Jones on both sides of the Atlantic, many of whom including James and his family have attended previous Spirit of Mother Jones festivals” 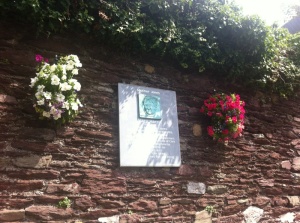 The festival and summer school takes place in the Shandon Historic Quarter from Tuesday 1st to Saturday 5th August next.

Please find below the details of the event in Mount Olive on July 11th and the contact details for James Goltz.

“A bit of earth will be removed above the grave of Mary Harris Jones, a.k.a Mother Jones, who lies within Union Miner’s Cemetery in Mt. Olive Illinois, on July 11, at 10:00am, in preparation for a journey to her birthplace in County Cork Ireland to the Shandon district within Cork City. The earth will be presented to the 6th annual Spirit of Mother Jones Festival there on August 1. The cemetery Perpetual Care Committee will be present to assist in performing the brief ceremony and task of gathering the earth with James Goltz, who refers to himself and other Mother Jones fans as, “a Friend of Mother Jones”. When asked why they were doing this, Goltz said, “We wish to send a piece of her essence home. The Spirit of Mother Jones moves us”. All interested parties are encouraged to attend this unique event.”

Mother Jones’ burial site at the Union Miner’s Cemetery, Mount Ollive, Illinois, where she lies beside the victims of the Virden Massacre.

On Sunday 5th October 2014 at mid day a gathering took place at the grave of Mother Jones at the Union Miners Cemetery at Mount Olive, Illinois. After some speeches and some songs from labour singer Len Wallace, the participants raised a toast in honour of Mother Jones. Irish Whiskey from Co Cork in the form of Jameson’s Redbreast was used and there followed a rousing rendition of “Solidarity Forever” after which many of the participants returned for the annual Mother Jones Foundation dinner at Springfield, Illinois later on Sunday night.

Attended by over 200 people, this annual dinner also heard a special message of greetings from the Cork Mother Jones committee.
According to Terry Reed, one of the event organisers;
“We hope this is the beginning of many more exchanges between our two groups as we are united in telling the world of the great lessons this grand champion of the working class spoke, took action and lived”
Terry also promised a film message from the Mother Jones Foundation for the 2015 Spirit of Mother Jones Festival.
State of Illinois Senator Andy Manar attended the Mother Jones gathering at Mount Olive on Sunday 5th October. He announced at the event that the State of Illinois had approved a grant for $41,000 towards the restoration of the grave site and monument of Mother Jones at Mount Olive. Senator Manar had also sent a wonderful message of solidarity to the Spirit of Mother Jones festival earlier this year (click link to view)
Already some $70,000 has been raised through the efforts of the trade union movement and the Illinois AFL-CIO thus ensuring that the full restoration of the grave site becomes a reality.