Spirit of Mother Jones Festival to commemorate the 175th Anniversary of the death of the United Irishman John Swiney of Shandon Street.

The Cork Mother Jones Committee is pleased to announce that Kieran Groeger will speak at the forthcoming Spirit of Mother Jones summer school on the life and times of John Swiney.

John Swiney, (also spelt Sweeny) was a leader of the United Irishmen in Cork City in the 1790s, traded from a woollen drapery shop in Shandon and on  the 175th anniversary of the year of his death, we propose to commemorate this extraordinary Cork patriot at the Spirit of Mother Jones summer school.

One of the most effective leaders of the United Irishmen during the revolutionary fervour which gripped Cork in the 1790s, unfortunately Swiney remains largely unknown in his native place even today. His name does not appear on the National Monument on the Grand Parade.

Sean O’ Coisdealbhain in a series of articles on the United Irishmen in the Cork Historical and Archaeological Journal in the late 1940s and ‘50s provided research into Swiney’s role and concluded that he deserved to be better remembered in Cork.

John Swiney was born in Cork on 7th August 1773 and as a young man along with the Sheares brothers and many others he became interested in the radical ideas and writings such as The Declaration of the Rights of Man emanating from the French Revolution. He joined the increasingly active Society of United Irishmen in Cork while still in his 20s.

Broguemakers Hill Cork in 1937, Swiney’s original shop of the 1790s would have been over to the left just out of shot at the junction with Shandon Street

A woolen draper by trade, his shop was located near the junction of Shandon Street and Blarney Street. This shop became a centre of operations, an unofficial headquarters for the United Irishmen in Cork City and witnessed many comings and goings of activists in the mid-1790s. Cork was in a ferment of civil unrest in this period with transportation for life being the regular punishment for persons administering the oath of the United Irishmen.

Some 4000 men in Cork city had joined the United Irishmen at that time and John Swiney was one of the main leaders………..indeed he had earlier joined Lord Donoughmore’s Loyal Cork Legion and militia to learn about military tactics.

He effectively operated as an intelligence officer for the United Irishmen, which was then seeking assistance from the French government for an invasion. On the ground he campaigned against tithes and linked up to the agrarian land disturbances especially in East Cork at this time.

However the Cork United Irishmen was riven with spies, his activities and his shop was watched by the authorities. He was arrested on the 28th March 1798 while visiting Roger O’Connor in Cork Jail. On the same day, two soldiers from the Dublin County Militia were executed in the City. James Murphy and Patrick Halvey were charged with sedition, found guilty and shot at the camp field on the present day Mardyke. John Swiney had earlier distributed handbills among the militia asking them to refuse to execute their colleagues. Swiney’s importance was such that he was immediately transported to Dublin on 29th March.

One of the many plaques erected by Comorodh ’98 in 1998 to recall the bi-centenary of the 1798 rebellion. This one remembers United Irishmen James Murphy and Patrick Halvey who were executed on Cork’s Mardyke in March 1798.

Swiney was eventually sent to the bleak Fort George outside Inverness in Scotland along with 20 other leaders of the United Irishmen including Roger O’Connor (the father of Chartist leader, Feargus O’Connor) and Arthur O’Connor of West Cork, Thomas Russell (born in Dromahane, Co Cork) and Thomas Addis Emmet, whose father Dr Robert Emmet worked among the poor of Cork for many years.

His shop on Shandon Street was purchased by Cornelius Swiney of Coolroe who continued to trade in woollen goods from the premises. After more than 3 years in prison Swiney was released and banished from Ireland and sent to Hamburg in Germany. However he had not given up on his dreams of a rebellion.

A year later, Swiney slipped quietly back to Cork following an invitation from Robert Emmet to lead Cork in the 1803 uprising. Amidst the disaster and retribution which followed the brief uprising in Dublin, the authorities arrested over 40 people in and around County Cork.  Swiney found refuge in Cork city, probably with the help of Cooper Penrose at Woodhill (Sarah Curran and Lord Edward Fitzgerald both found refuge there) and fled again from Crosshaven in Cork Harbour to France where he delivered the news to Thomas Addis Emmet in Paris of his brother’s recent execution in Dublin. 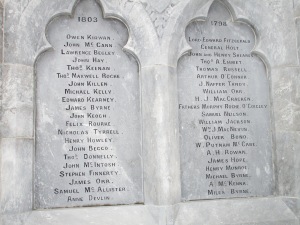 Panels from the National Monument in Cork’s Grand Parade. Unfortunately it contains no mention of John Swiney.

Along with many other Irish refugees after the failed rebellions, he joined the Irish Legion established by Napoleon in 1803 and was given the rank of captain.

In 1804, Captain Swiney took part in a celebrated duel with a fellow Corkman Thomas Corbett in which Swiney was wounded but recovered while Corbett was mortally wounded.

In 1805 he married a French woman, became a property owner and made at least one visit to America on business and settled in the Bordeaux area. His naturalization papers dated December 1818 described him as a former captain and merchant of Morlaix, department of Finistere.

He died in October 1844 and is buried in the cemetery of St Martin in Morlaix.

The talk entitled “The Extraordinary Life of John Swiney, the United Irishman from Shandon” will take place on Thursday 1st August 2019 at the Cathedral Visitors Centre. (See later festival programme for further details).

Dr Groeger is the author of the Trial and Execution of James Cotter, and the Little Book of Youghal and has recently published The much-maligned Mary Pike, which takes people back to events in Cork city in the 1790s. He is a retired headmaster and writes articles on local history and “delights in stripping away the layers of a story and revealing the truth.”

If anyone has further information in relation to John Swiney, please email motherjonescork@gmail.com